Well that was a pretty fantastic afternoon of live music. It may have been cold but it was dry and the courtyard of the Worcester Arts Workshop was packed with people keen to welcome back the new season of Lazy Sundays. 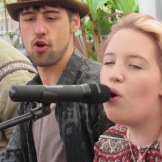 For those of you who don’t know, Lazy Sunday is a monthly live music event organised by Amanda and Eloina at Cafe Bliss. Running during the warmer months, normally April to September it takes place outside in the courtyard. They seem to get some amazing acts from all over the country and this month (April) was no exception.

Kicking off the proceedings was local girl Eva, singer songwriter and member of the local band Blue Dive Her songs were mature, her delivery was strong, if a little nervous but she delivered well and probably won a few new fans today.

Paul Jeffery. Despite knowing each other for many, many (many) years this is the first time they have collaborated properly on a project. Two extremely talented guitarists and two distinctive vocals makes one interesting and enjoyable act. Covering (in their own style) Apache, Green Sleeves, Eleanor Rigby amongst others. Sometimes shambolic, often awe inspiring, always entertaining. 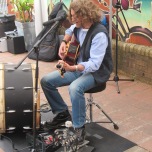 Our first actually billed act was Ian Luther from Chepstow. A one man acoustic powerhouse of blues, with added soul, a little country and a whole heap of talent. Amazing songwriter and excellent musician utilising guitar looping, kick drum and percussion, Ian is an extremely talented vocalist and performer. Self penned tracks sit seamlessly with the odd cover and his relaxed banter with the crowd is nice to see.

Mahalia is a beautiful singer songwriter from Leicester. Her acoustic guitar playing is only surpassed by her wonderfully haunting vocals and hea
rtfelt and personal lyrics. Such a fine performance from an artist with mature talent and obvious passion beyond her young age.

Headliners were Bewdley / Kidderminster band, Arcadia Roots. Five awesomely talented musicians who right from the off won the audience over with their tight soulful dub roots, full sound and some of the tightest bandmanship (is that actually a word?) I have seen in quite a while.

They have possibly one of the strongest vocalist on the scene at the moment, some damn fine experienced musicians and some of the finest song arrangements you can imagine. Duel vocals of Dave and Maddie that work off each other like two bees fighting over the same flower (sorry, I couldn’t think of a better analogy) and a band that look and play totally at ease with each other. Add this to the fact that they have some amazing songs and you have a highly enjoyable (but too short) set. I would recommend catching their full set at The Marrs Bar at the end of the month.

When I sound engineer these gigs I rarely know what to expect. Sure, I’m given the names of the acts playing but I don’t do a lot of research into their tech specs. (maybe I should) The acts that Amanda books are often from out of town and usually ones that I have never heard of. I do tend to wing it slightly so there is always an element of worry. Will I have enough microphones? Are there enough channels on the mixer? Will the xlr/jack cables be nice to me and not buzz or break? Will I have enough power sockets? Will the mic stands behave themselves? Will the neighbours complain that it’s too loud? It makes life interesting and fortunately it normally turns out okay.

That’s why I love doing these gigs. It’s usually a surprise and never, ever a disappointment.

It’s nice when things go right, the equipment behaves, the audience are supportive and the musicians are genuinely nice people and this month it was a wonderfully smooth event.

I don’t think I have seen an act at Lazy Sunday that I did not enjoy, and the artists always seem to have a good time. Audience numbers are always impressive, there are normally a few odd surprise acts turning up, plus, for some strange reason, the sun is nearly always out. Lazy Sunday is a truly fantastic event. If you’ve never been to one you really should. Next one is Sunday May 8th.

One thought on “Lazy Sunday Review (sort of)”

[…] on this blog I mentioned a girl called Eva who played the Lazy Sunday a couple of weeks back. Well tonight we were treated by the full band, The Blue Dive. Three piece […]